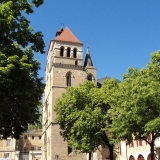 Cahors is a nice and small medieval city located in the North of Toulouse.

Cahors will amaze you with its medieval heritage, the view that you'll have on the city and the river from the different hills and its charming riverside.

From the medieval Valentré Bridge to the Cathedral of Saint Etienne going through the market place or the banks of the Lot, Cahors is made to be explored and enjoyed!

What to do and see in Cahors:

Take at least a day to discover Cahors. Take one night to chill out in the city and enjoy Cahors landscapes from the hill!

A sample of Cahors:

How to get to Cahors:

Book a room in Cahors
Book a flat in Cahors

More information about Cahors on www.holidays-cahors.co.uk

The cities to discover around Cahors are: Toulouse – Bordeaux –  Carcassonne – Collioure – Barcelona