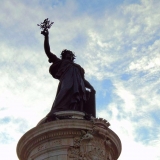 Like almost every city and capital city, Paris has its Republic Place.

As Place de la République is not a touristic area, Republic square reveals the everyday way of life, for the inhabitant, in Paris.

Place de la République was constructed during the 2nd empire, in 1850s, when Haussman was in charge to revitalize the city of Paris by making it new and modern.

Under the statue of Marianne, you will be able to see important dates about the French Republic construction, in explicative drawings; and the motto of the French Republic: Liberté, Egalité, Fraternité (Liberty, Equality and Brotherhood).

The little sister of "Place de la République" is "Place de la Nation" where you will be able to admire the statue of Marianne triumphing for the Republic.