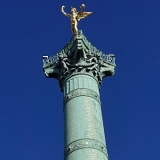 Place de la Bastille is known as the place where the French Revolution began on the 14th of July 1789.

The Bastille was used as a jail and it was a symbol of the arbitrary nature of royal power, (some rivals of the king were put into jail for no reason) the poor inhabitant of Faubourg Saint-Antoine street decided to storme the jail to protest about the public's dissatisfaction towards Louis XVI carelessness about inflation of food prices.

To put you in the context of 1789, you have to know that lots of storms destroyed the crops during summers of 1787 and 1788.
With its consequences to increase the cereal prices used to make flour for bread, one of the cheapest and basic foods produced by the farmers.
Poor people like hand workers and farmers were completely starving, unable to afford to buy breads to eat.

Aware that the situation was becoming worse in his country, the French King Louis XVI ordered to record the "cahiers de doléances".
The "cahiers de doléances" was a kind of survey or guestbook where the population could write down their main preoccupations.
It's supposed to see what's going right and what's going wrong to help the government to take actions and decisions for the population.

But using this cahier de doléances was more a political tactic than improving people's situations.
Louis XVI only thought that people would think that they would be listened to by the government and it would calm them down and make them happy. It was just to give a good impression and distract the people's attention from the starving issue.

In fact Louis XVI didn't take the record seriously and didn't make any improvement for the people's economic situation.

When the population realized that the king didn't listen and cheated on them ….

This is how the French Revolution started on July 14th 1789.

Now at the place of the destroyed Bastille jail you can see in the centre the column of July.
This column was made to commemorate all the French citizens who fought for the public's right in the 2nd revolution of July 1830 (27-28-29 of July 1830).

Fights for citizen's rights took time and continued after the French Revolution.

Due to that Revolution period during the history of France, Bastille is a popular place for the French strikes during those days.

If you want to relax in Bastille, you can go for a walk along the Canal Saint Martin (exit towards Rue de Lyon, Boulevard de Bastille) or sunbath in Place des Vosges Park.

Bastille is also a big French student's meeting point to hang out at night.

How to get to Bastille: Place de la Bastille, 75004 Paris