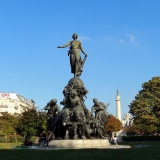 Place de la Nation is famous for being the gateway to Paris located in the Eastern side of Paris.

As for the western gateway to Paris, you will find Napoleon Bonaparte's famous Arc de Triomphe.

Even if Paris is a big city, it's easy to remember its geography to know where the most important places to see are.
All the most important spots are located on a line which starts at place de la Nation and which finishes at Place de l'Etoile - Arc de Triomphe ;)
Let's mention for instance the Place de la Bastille, the Châtelet district, the Louvre museum, the Place de la Concorde with the Luxor Obelisk, the Champs Elysées avenue and the Arc de Triomphe.
Have a look on the map over here, you'll see ;)

The entrance to Paris is represented by two big columns called "Barrière du Trône".
Barrière du Trône is one of the 61 remaining gates which used to be a toll for product that was entering Paris from 1785 to 1948.

On the top of the Paris Vincennes Column gates, you will see:

This big bronze statue represents a chariot drawn by two lions.
The Republic statue is surrounded by different figures:

If you want to admire the Place de la Nation statue, go along the roundabout, you will find a pedestrian crossing in rue Fabre d'Eglantine ;)