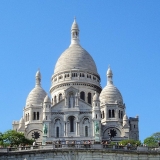 The Sacré-Cœur basilica is the 2nd most important religious monument in Paris, after Notre Dame de Paris cathedral.

The construction of Sacré-Cœur was governed by the state in 1871.
Sacré-Cœur construction was more of a tactical and political strategy, than a spiritual devotion for the French government.

In fact, the French government decided to build the basilica just after the defeat of France against Germany during the war of 1870.
The French government saw this defeat as god's punishment; not as due to unsuccessful military tactics.
The construction of Sacré-Cœur was ordered to ask the forgiveness of god, for mistakes the French citizens had made.

From the square in front of Sacré-Cœur basilica you have an amazing view over Paris.

You can also rest in the park of Sacré-Cœur, talk with your friends, have some drinks and watch street artists perform.

For those who are not afraid with taking a short walk around the hill, we recommend you to walk around le Sacré-Cœur for a promenade in Montmartre's district.
You will discover souvenirs shops, restaurants, artistic products everywhere, painters, vineyard and other spots that tourist frequent and enjoy browsing.

Montmartre district is all what makes this lovely Parisian typical atmosphere ;)

A Sample of Sacré-Cœur Basilica Paris: