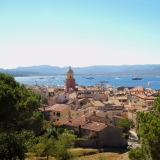 Saint Tropez is a charming city of the French Riviera.

Saint Tropez is famous for being a fancy seaside resort of the French Riviera where rich and famous people go on holidays.

When you go to Saint Tropez, especially if you visit Saint Tropez during summer time, you will be able to see the impressive yacht of those famous people in the port.

Among the famous people that often go to Saint Tropez for holidays, you have famous actors, musicians, TV presenters, football players. We can mention some of them like Sylvester Stallone, Leonardo DiCaprio, Angelina Jolie & Brad Pitt, Beyonce, Lady Gaga, Rihanna, David Beckam and so on...

Saint Tropez started to become famous in the 60’ when the French Actor Louis de Funès played in the funny movie Le Gendarme de Saint Tropez (the Troops of Saint Tropez) in 1964. This movie is about a funny representation of the clichés inherited from the Police of the South of France and the Tourism industry.

As Louis de Funès is one of the most famous actors of the 60’ his movie Le Gendarme de Saint Tropez has been viewed by a huge number of people in France as well as in the world.
Louis de Funès movies has made a huge promotion of Saint Tropez through the world. After the broadcast of Les Gendarmes de Saint Tropez, many people started to want to visit this charming village of the French Riviera.

The famous singer and model of the 50’s Brigitte Bardot also popularized the image of Saint Tropez in the Magazines, in the Movies like And God Created Women and in some song like in La Madrague.

Famous actors and singers started to go in Saint Tropez for holidays and started to build this fancy image of the city.

Nowadays, Saint Tropez is still a fancy place to go on holidays during summer time.
During summer, Saint Tropez looks like a little Ibiza where people enjoy the sun and the beach during daytime and party at night.
Of course Saint Tropez is not as huge as Ibiza but it is a place where plenty private boat parties and villa houses parties takes place.

If you visit Saint Tropez out of summer period, the city is quieter.

Apart from the luxury and the party atmosphere, it is good to visit Saint Tropez just to chill in the sun.
We highly recommend you to enjoy Saint Tropez atmosphere by walking on the port and on the fortress.

Here is a sample of what you can do and see in Saint Tropez:

Take half a day, to a day to enjoy, chill and discover Saint Tropez!

A sample of Saint Tropez:

How to get to Saint Tropez: