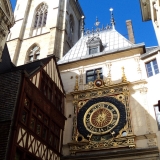 Rouen is a city of the French Normandy famous for its painting and churches heritage.

Rouen is a testimonial for the artistic impressionist painting movement developed during the 2nd part of the 19 century in Normandy.
Famous painters like Claude Monet, Pierre Auguste Renoir and Alfred Sisley found in Rouen the ability to paint natural light switch over the city without being hypnotized by the artificial lights of the city, like in Paris for instance.
The natural light game of those impressionist painting were popularize through the world with the help of the booming railway industry of the 19 century that allowed the 1st weekend holidays!

Rouen is also famous for its strong gothic church heritage.
You can discover the Rouen this typical Flamboyant Gothic Style in the Rouen Cathedral and in the several churches builds around the 16 century.

In Rouen, you can also enjoy the city center atmosphere!

You can admire the timbered house that will bring you back to the atmosphere of the Rouen middle age!

Rouen is also a city where you can chill at restaurant terrace to discover the famous French Normandy cheese like the Camembert, the cider alcohol made of apples or pears and the pancakes.

What to see in Rouen:

Take at least half of a day to discover Rouen!

A sample of Rouen:

How to get to Rouen:

More information about Rouen on en.rouentourisme.com

The cities to discover around Rouen are: Paris – Lille – Nantes – French Brittany