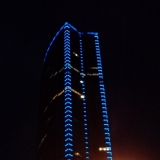 Constructed in 1973, Montparnasse Tower is the highest building in Paris with its 210 meters high and 59 floors.
Let's mention that the Eiffel tower is not considered as a building.

The tower is located on a line with Ecole Militaire, Invalides Museum, Champs de Mars, Tour Eiffel and Trocadéro.

Inside Montparnasse Tower, you will find a shopping mall, business offices and company headquarters.

Even if the most part of the tower belongs to private companies, you can visit the 56th floor to admire Paris landscape and also have some food in restaurants.
From the 56 floor, you can access the rooftop, which sometimes is use for helicopters departure and arrival.

For the Frenchies, Montparnasse Tower is famous for the absurd comedy called "La Tour Montparnasse infernale" who tell the story of two window cleaners who become victims of a hostage taking.

A sample of Tour Montparnasse Paris: