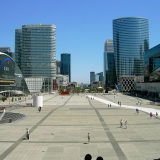 La Défense is the Business district of Paris.

La Défense is located on the Western side of Paris, on the axe of Champs Elysées Avenue.

You will find in La Défense new buildings and headquarter of famous business companies.

But the general area of La Défense was born in the 60'.

Before La Défense buildings, Commercial activity was located, in the historic center of Paris, in the 2nd district of Paris between the Bourse and the Opera.
That's why you have in Paris the "Palais de la Bourse" which mean "stock exchange" in French.

The business district of La Défense founds its name from the victorious soldiers who fought for protecting Paris from the enemy during the Franco-Prussian War of 1870.
To commemorate those brave soldiers, you will see in La Défense district a statue called "La Défense de Paris".

In La Défense Business district you will see:

How to get to La Défense Business District: Parvis de la Défense, 92800 Puteaux