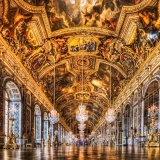 Versailles Castle is famous for being the most important and the most representative castle of the French Monarchy.

Versailles Castle has been mostly built on the order of Louis XIV, "Le Roi Soleil" the most famous French King of all time.

Louis XIV is so famous in France and all over the world because he developed solid foundations for the French kingdom:

This modernization of managing the state inspired several other countries in the world.

Louis XIV also built massive connections to increase the communication over the kingdom.  Those connections are nowadays the main roads linking the biggest cities in France.

But the king decided to make Versailles' Castle more impressive than Vaux le Vicomte.
Louis XIV couldn't handle to live in a smaller castle that his superintendent of finance, Nicolas Fouquet.
You should definitely have a look on Vaux le Vicomte article to learn more about Louis XIV jalousie crisis towards his superintendent of finance, Nicolas Fouquet!

In 1682, Louis XIV decided to move the Court and the Seat of Government from Louvre Palace (actual Louvre Museum) to Versailles Castle.

At Versailles Castle you will see:

What to see in Versailles Catsle:

What to see in Palaces of Trianon:

In Versailles Park, you have two recreational residence called Trianon.

What to see in Versailles' Gardens and Park:

Laid out by the French Landscaper André Le Nôtre in 1661, Versailles' Garden made the promotion of French Garden Landscape art all over Europe. A French Garden landscape is geometrical and shaped with groves, statues, fountains and mirror games.

As Versailles' Garden is quite huge, you can walk in the Park for one full day!
If you have the opportunity to visit Versailles Garden by riding a bike, just do it ;)

Remember than Versailles Castle, Palaces of Trianon and Park is quite big, you should go to Versailles for at least one full day!

All year long, you will also found different kind of shows in Versailles to make you feel as is if you were Louis XIV in person.

Discover Louis XIV's life with "the walk of the King":

You will be able to get additional information about all those special shows on Versailles' Castle website ;)

How to get to Versailles Castle: Château de Versailles, Place d'Armes 78000 Versailles