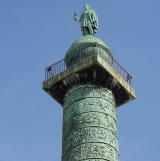 Napoleon Bonaparte ordered Vendôme column to commemorate, as well as, glorify the success of his army in the battle of Austerlitz in 1805.

Vendôme column was inspired by the Trajan's column and the Marcus Aurelius column in Rome.

The Vendôme column is made of 1200 cannons, taken from both the Russian and Austrian armies.
Vendôme column is decorated with antique styled bas reliefs representing battle scenes and military trophies galore.

Column's twisted shape is inherent of the stairway inside that gives a view to Napoleon's statue. Fascinated, one more time, by Roman Empire Napoleon Bonaparte is represented like Caesar Imperator with the imperial laurel-leaf crown.
Do not look to go up to the Vendôme column because public is not allowed there!

All around Vendôme place you will find plenty of luxury stores of all kind: jewellers, perfumeries, fashion stores and so on!

A sample of Vendôme column in Place Vendôme Paris:

How to get to Vendôme Place: Place Vendôme, Paris