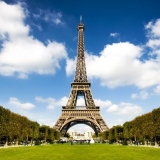 What would Paris be without the Eiffel Tower ?
Constructed by Gustave Eiffel and his team, working for the Universal Exhibition of 1889, the Eiffel Tower was built to promote the French Industry's savoir-faire.

You may know that you can't truly be French if you don't criticize new things. So in true French style everyone began to complain about the construction of the Tower because it was too modern, too big…
The Tour Eiffel spoilt the charm of other architectural monuments and so on.
Lots of people wanted the Eiffel Tower to be knocked down.

To protect his work Gustave Eiffel gave the tower a practical use. Tour Eiffel was used for science experiments, weather forecasts, radio transmissions…

It was the radio transmission that made people completely change their mind about the Eiffel Tower.
During WWI French people started to admire the tower when the French army won against the Germans, thanks to the good communication system that was made available by the antenna placed on the Eiffel Tower.
The Eiffel Tower became an important symbol of Paris and of French people.

As the Eiffel Tower was built to promote French science and industry you will see the names of 72 French scientists on the 1st floor of the tower.
The Eiffel Tower promoted the French industry so well that Gustave Eiffel built more buildings around the world. To name a few :

If you are going to be in Paris for a longer stay, the Eiffel Tower is something that should be seen in both the daytime and at night.
Make sure that the sky is clear to enjoy it fully ;)
From the 2nd floor you will have a very good view over the main monuments of Paris.
From the 3rd floor you can see an 80km panoramic view of Paris.

The most enjoyable things to do are having a picnic on the Champs de Mars, admiring the sunset on the Eiffel Tower or the sparkling tower, from the stairs at Trocadero, at night.

A sample of the Eiffel Tower:

Book a Room in Paris - Book a Flat in Paris