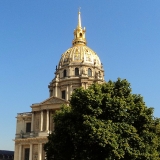 But the Invalides edifice has been constructed long before Napoleon's Bonaparte glory.
This is Louis XIV in 1671 who decided to build the Hôtel des Invalides to receive the retired or injured soldier of his army.

Inside the Invalides you will find: