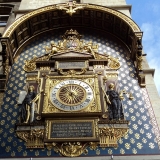 Conciergerie was the first French kings Palace before Charles V decided to move his residence to le Louvre in 1364.

The best view over La Conciergerie is when you are on the border of Seine River. Like during summertime in Paris Plage :)

Before you go inside we should warn you that there is nothing really impressive to see in La Conciergerie. However what is worth seeing is the Sainte-Chapelle which is also part of the Royal Palace with La Conciergerie.

Part of the Royal Palace, Sainte-Chapelle was ordered by the French king Louis IX in 1242 to keep some religious treasures that belonged to the king family.

The most popular of these treasures are the relics of the Passion of Christ and the Crown of Thorns. Sainte-Chapelle was the private chapel for the king, his close friends and family.
Ornamented by the lily-flowers the emblems for the French king, Sainte-Chapelle considerably improved the royal power over the crowd as the king is to be representative of god.

Nowadays the edifice between the Sainte-Chapelle and La Conciergerie is the Justice Palace. That's why you have bodyguards and cabs everywhere at the entrance.

A sample of La Conciergerie and Sainte-Chapelle: