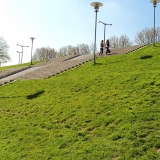 You don't mind about going to a park without having a view over a castle or Parisian monuments?
All you want is to quit the city without taking the train for an hour or two!
So Bercy Park is the right place for you!

Located between Bercy Village shopping mall, and the Bercy Arena (previously named Palais Omnisport de Paris Bercy), Bercy Park will make you think that you are in the countryside of France.

Going to Bercy Park is good if you want to enjoy some sunny times and refresh your mind. You can visit Parc de Bercy either for your morning or evening sports exercises; or to be in a quiet place to read a book, work on your lessons or simply relax

For the most romantic among you, it's time to bring your girlfriend, especially during spring time, for a sweet walk around the hills and lake to enjoy the flowers and inviting vineyard.

And for your Erasmus' crew, Bercy Park is a good place to get together and to take good pictures on which to have found memories.
So dress with some of your traditional countryside clothes, bring your camera, and contribute to completing the work of the Artist Rachid Khimoune's statue creation "Les Enfants du Monde".
To find the statues, climb the stairs near the Bercy Arena.

You can also decide to go to Bercy Park to play board game or sports game like Ping-Pong, football, basketball and so on!
Parc de Bercy is also nice to have a slide, like a boss, in the skate park.