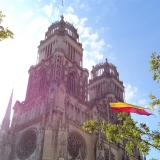 Orléans is a city located in one hour from the South of Paris.

As the city center of Orléans is quite small, you can easily visit Orléans by foot, by walking from the train station in one afternoon!

Orléans is famous for being the city liberated by Jeanne d’Arc from the United Kingdom during the Hundred Year’s war.

Jeanne d’Arc is probably the most famous women of the French History due to her military implication during the hundred year’s war, which opposed the French kingdom to the United Kingdom since 1337.
When she was a teen, Jeanne has pretended that she heard voices telling her to liberate the French kingdom. She built an army and took part in the liberation of the city of Orléans the 8 of May 1429.
But due to her male appearance and her military position, she was caught and served by some French Christians to the British army because a woman could not behave like she does. She finished burned, ages 18 in Rouen because she offended the men’s rights by using military power.

Orléans is the gateway over the Loire’s Castles, which are a group of more than hundred castles built in the year 1500 during the French Renaissance when the French court spent haunting time in this area of France.
To mention some of the most famous Loire’s Castle you have: Chambord, Chenonceau, Blois, Tours, Amboise, Saumur …

Orléans is a great place to chill during an afternoon if you come from Paris!

Main things to see in Orléans:

Take at least half a day to visit Orléans city center!

A sample of Orléans:

How to get to Orléans:


More information about Orléans on www.tourisme-orleansmetropole.com

The cities to discover around Orléans are: Paris - Blois - Amboise - Tours